An overview of evidence-based practice (EBP) and EBP resources at Stimson Library. 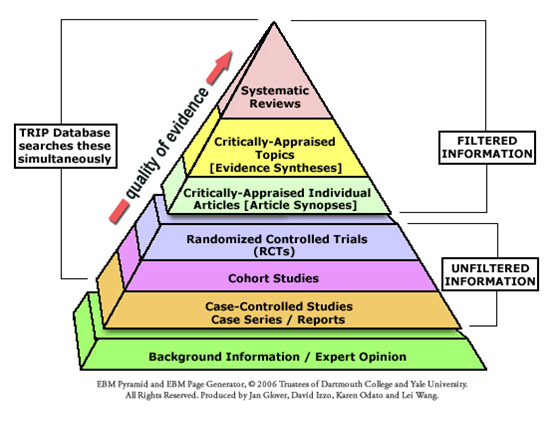 Studies are assigned levels of evidence based on their methodology. The evidence pyramid is an easy way to visualize this hierarchy of evidence.

At the base of the pyramid is unfiltered evidence including randomized controlled trials, cohort studies and case reports. These are individual reports and studies, also known as the primary literature.

Use the following databases to search for evidence-based research. Click on "More" for directions on how to use filters to retrieve a specific study type.

A systematic review focuses on a clinical topic and answers a specific question.  A thorough literature search is conducted to identify all studies using sound methodology.  The studies are evaluated and the results are summarized according to preselected criteria. No quantitative statistical analysis is done.

A meta analysis carefully examines a number of credible studies on a topic and combines the results using quantitative statistical methodology. It is a higher quality systematic review and therefore is at the top of the pyramid.

A Critically Appraised Topic (CAT) is a short summary of the best available evidence, created to answer a specific clinical question.

A Critically Appraised Topic can be found in the following databases:

A Critically-Appraised Individual Article (CAIAs) identifies, evaluates and synposizes a study of excellent quality that will influence a standard of practice.

A Critically Appraised Individual Article can be found in ACP Journal Club which is located in the following database:

Base of the Pyramid - Unfiltered Evidence

A randomized controlled trial is a carefully planned project that studies the effect of a therapy on patients. It includes methodologies that reduce the potential for bias (randomization and blinding) and that allow for a comparison between intervention groups and control groups.

A cohort study takes a large population and follows the patients who have a specific condition or receive a particular treatment over time and compares them with another group that has not been affected by the condition or treatment being studied. Cohort studies are observational and not as reliable as randomized controlled studies since the two groups may differ in ways other than in the variable under study.

A case control study is an observational study in which patients who already have a specific condition (case group) are compared with people who do not (control group). There is no randomization. These studies are usually less reliable than randomized controlled trials and cohort studies because showing a statistical relationship does not mean that one factor necessarily caused the other. These studies look back into time and patient records are usually reviewed.

A case report consists of collections of reports on the treatment of individual patients or a report on a single patient. Because they are reports of cases and use no control groups with which to compare outcomes, they have no statistical validity.

The Bio-Medical Library at the University of Minnesota has created an excellent visual guide to basic research study designs in the hierarchy of evidence as does the Center for Evidence-Based Medicine. 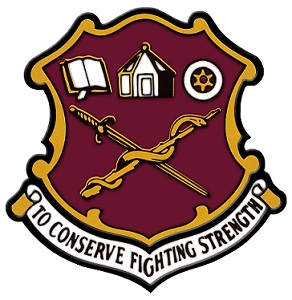